Researching Police in/under Protest. Police Research as a Journey of Discovery with Obstacles 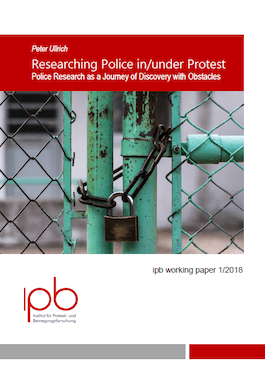 The police, in particular the riot police, can be a rather inaccessible object of investigation, whose reservations towards research are analysed with reference to five “barriers on the way to the police”: 1) police control of access to the field, 2) the doubly asymmetric research relationship, 3) steering attempts by the police, 4) the sceptical attitude of interviewees and 5) the restrained discussion behaviour. However, what appears as a hurdle from a research perspective rather allows structures of the object itself to be reconstructed and is explained here as a result of organisational characteristics and of police culture. These include a prevalence of narratives of police “innocence” and “powerlessness” with which resistance against external aspirations for control is buttressed. The police views itself from its perspective as constantly being unjustly publicly criticised. The basic attitude of reserve if not hostility towards research leads to the definitional power of the police in its field of action partially being transferred also to the research. However, police interference has its limits, and there are counterstrategies that will be set forth. Most data used are from a GTM project on protest policing, based primarily on group discussions and expert interviews with riot police.