In: Protest for a Future: Composition, Mobilization and Motives of the Participants in Fridays for Future Climate Protests on 15 March, 2019 in 13 European Cities 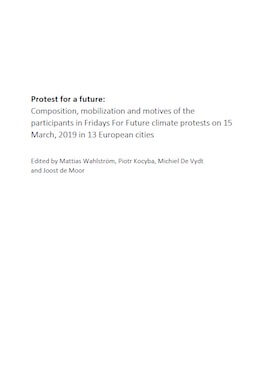 The #FridaysForFuture climate protests mobilized more than 1.6 million people around the globe in March 2019. Through a school strike, a new generation has been galvanized, representing a historical turn in climate activism. This wave of climate protest mobilization is unique in its tactics, global scope and appeal to teenage school students. Media coverage of these protests and high-level national and international political meetings involving the movement’s icon, Greta Thunberg, illustrate a level of global attention that no previous youth movement has ever received.

A team of social scientists from universities across Europe1 organized a survey of the global FFF strike events on March 15. The team surveyed protesters in 13 cities in nine European countries using the same research design to collect data, following the well-established protest survey methodology used previously in the “Caught in the Act of Protest: Contextualizing Contestation” (CCC) project.
Demographically, the 14-19 age group is significantly over-represented among our respondents. More surprising is the predominance of female participants, particularly among teenagers. We believe that the movement’s female leaders may have a strong mobilizing effect on (particularly young) women.

Education remains a strong predictor of participation. The movement’s ability to create engaged young citizens through their climate activism is also highly significant, with average figures for firsttime participants (among school students) on March 15 at around 38% across all countries.

Despite the adults participating in solidarity with school students, our survey data shows that the involvement of peers seems to matter more for school students. 45% of all school students agreed with the statement that Greta Thunberg had been a factor in their decision to join the Climate Strike.

Compared with the adults in our survey, school students are seldom engaged as financial contributors or active members of environmental NGOs. Activists showed strong identification with both instrumental and expressive motivations. To a higher degree than adults, young respondents stated a wish to defend their interests, although they did not take success in this aim for granted. We can observe that participants feel distrustful about their current national governments’ capacity to deal with global warming, but they still push these governments for climate policies. In almost every country, student and adult participants are extremely sceptical about relying on companies and the market to solve environmental problems. There are significant differences between countries, and between adults and school students, over stopping climate change through individual lifestyle changes, highlighting that the movement may actually be quite heterogeneous in some regards.

The significant presence of young first-timers in the strike signals the emergence of a new generation of climate activists and the possible development of FFF as a broader, grassroots movement, with a strong female presence and reliance on social media and peer networks. It highlights limited commitment to established environmental organisations, with varying interpretations of the importance of lifestyle politics and a hopeful attitude towards the future. Further research will be needed to follow the development of the first mass youth mobilization on climate change. During the second global school strike on May 24, 2019, new surveys were organized in Stockholm and Budapest.